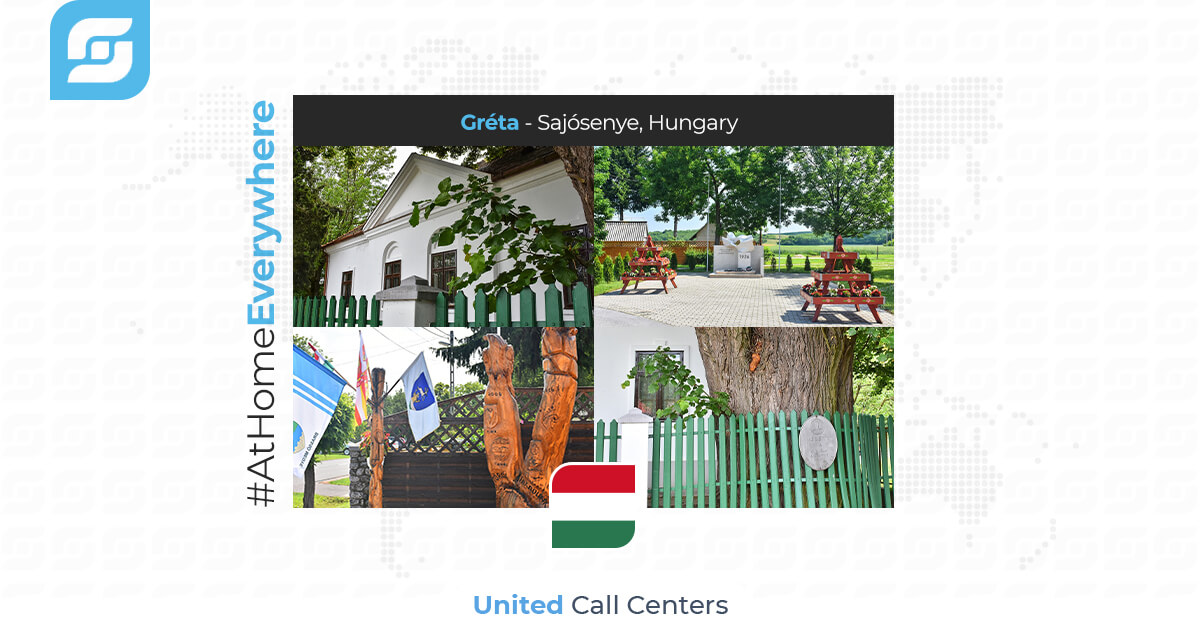 In the previous two parts of our series, we’ve been to Slovenia and South Africa. While we currently travel more than maybe any other periods of the year thanks to summer vacations – and a more or less normalized pandemic situations -, sometimes we can find hidden treasures near our home, especially if we don’t crave the beach or a bustling metropolis. This time, it’s Gréta from United Call Centers’ Hungarian team who presents her place of residence, a small village not far from one of the headquarter cities of the United Call Centers, Miskolc.

What should we know about the place where you live?

Sajósenye is a small settlement in Borsod-Abaúj-Zemplén County, 15 km from Miskolc, with about 500 inhabitants. A small, quiet, peaceful village.

Why do you love to live there?

I really like that the village is getting more and more beautiful, and there are some developments in Sajósenye every year. I really like our family house and the fact that I can go outside at any time.

If we were to go, what do you recommend to see?

There are not so much hiking destinations here, but it’s worth going out to the nearby small forests. One of the main attractions of the village is the Máriássy mansion, which is an 18th-century Baroque building. Right in front of the house is the Rákóczi lime tree, declared a nature conservation value. If you visit the village, I suggest to see the Ecumenical Church, the Nest Reformed Nursing Home for the Disabled, the monument of Hungarian Revolution of 1956, the Village House and its surroundings.

Which place would you like to visit the most?

What are the three first things that come to your mind, when you hear the word, ’Hungary’?

FACTS IN A NUTSHELL

Sajósenye already existed in the time of the kings of the Árpád dynasty. Around 1311 it appeared in various documents as Sene or Scienne, and for a long time it was a significant settlement in the area. The village was destroyed during the Turkish occupation and became uninhabited for a long time from the end of 16th century, but was repopulated later – the current population is about 500 people. The main sights of the village are the Máriássy mansion, built between 1785-95 and The Linden Tree of Rákóczi , which was also among the nominees of the Tree of the Year Movement in 2017. According to the legend, prince Francis II Rákóczi – leader of the Hungarian uprising against the Habsburgs in 1703-11 – rested under the tree once, accompanied by his team of 150-200 people, and then set off quickly due to an unexpected event, leaving plenty of food and drink for the locals.

Read the previous parts of the series here!