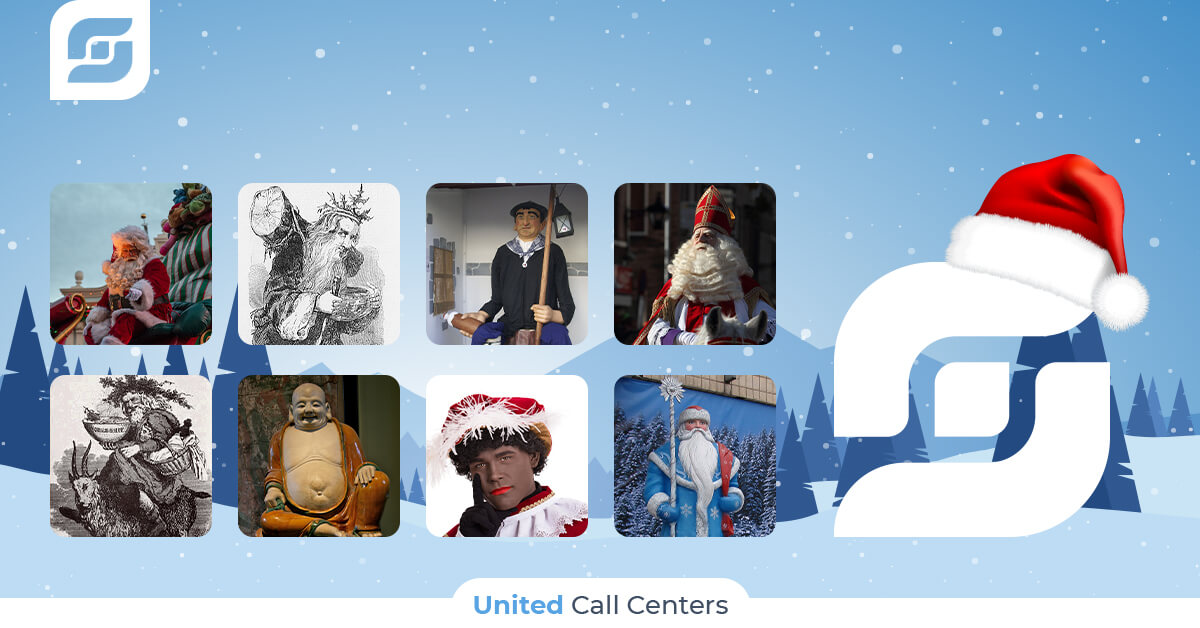 The origins of Santa Claus in a nutshell

There are different names for Santa Claus in different countries. One thing is for sure, almost every nation has its own mythical gift-giving figure, from the French Père Noël to Finland’s Joulupukki to the Japanese Hoteiosho. What is certain, however, is that the origin story of the jovial, bearded old man in the red suit is more complicated than the love affairs of a carefully twisted crime thriller or a television soap opera. Could the Christian bishop of a town in Turkey have as much to do with the Viking arch-god as with American Civil War propaganda? Here are some interesting facts on this subject. 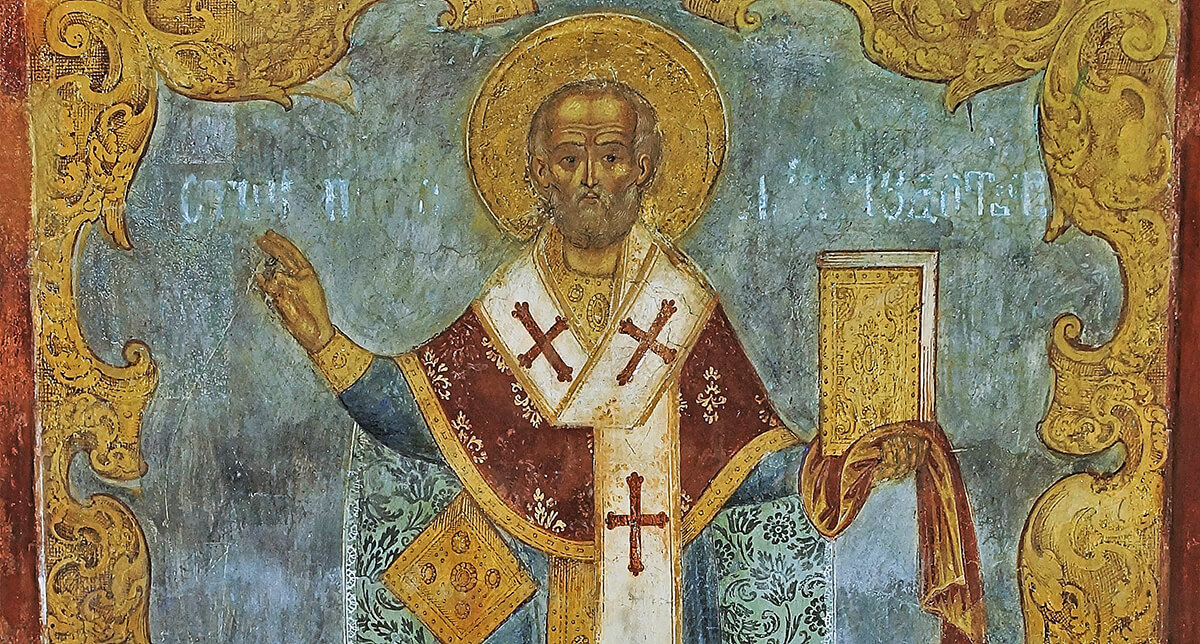 Among the various figures, one of the meeting points is Saint Nicholas of Myra (270-343), bishop of the city of Myra – now Demre, Turkey – who is revered in many countries as the patron saint of sailors, merchants, perfumers, pharmacists, pawnbrokers, children, students and people in difficult circumstances. Legend has it that St Nicholas secretly helped, as an anonymous benefactor, to marry off three daughters of an impoverished nobleman who, lacking a suitable dowry, could not marry them off and risked leaving them unmarried and forced into prostitution for a living. One night, Nicholas threw a purse full of gold into the house so that the eldest daughter could marry. The following year he did the same for the middle daughter, but in the third year the father took her out to thank him for the gift, but Nicholas said he owed thanks to God alone.

(Another version has it that the youngest daughter had just put her stocking in the chimney to dry when the bishop threw the purse in. Rumors began to spread that the gift-giver was ‘Santa Claus’, who lived in the always snow-covered Toros Mountains, but the secret was later revealed to be none other than Nicholas himself, the town’s Christian bishop. Among the gold coins thrown to the little girl was a coin that had been given to her by a local gold dealer.)

The great hunt and the eight-legged horse 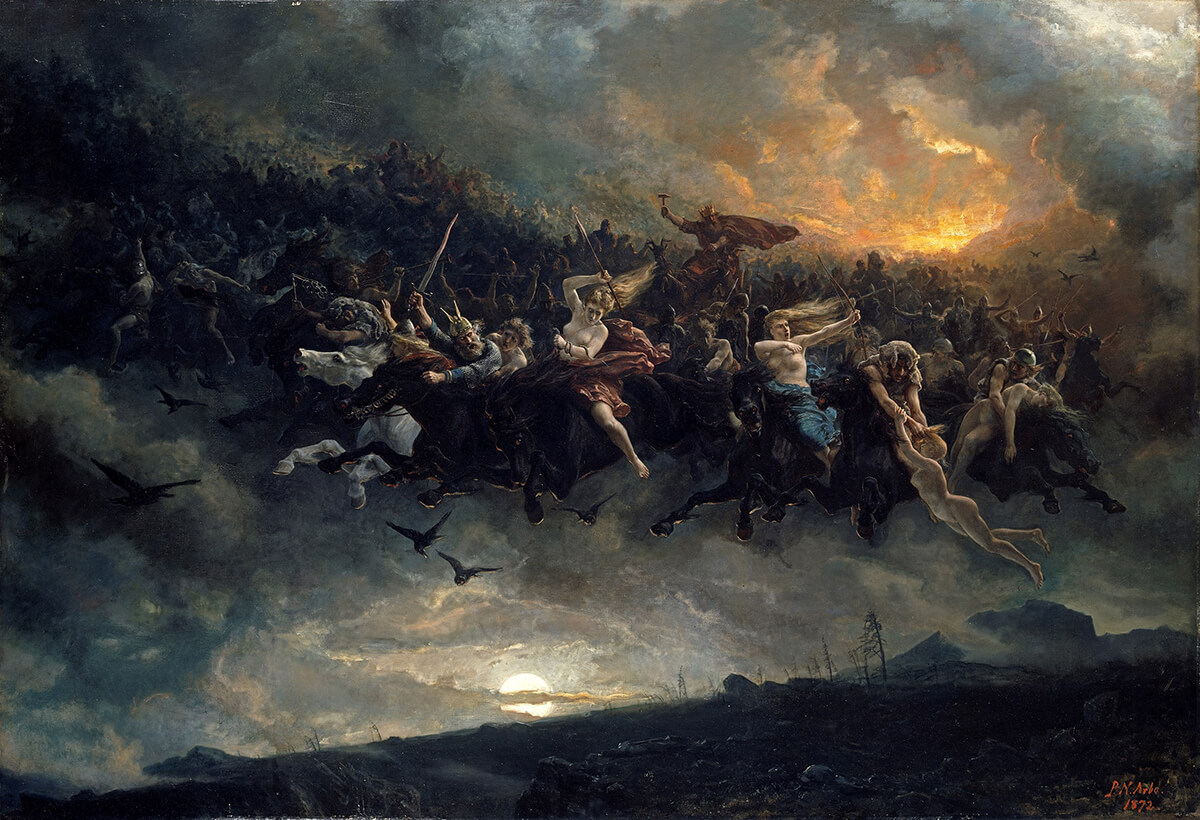 Another inspiration for the figure of Santa Claus is Odin himself, the chief god of the Vikings. A holiday similar to Christmas, linked to the winter solstice, is known from many countries long before the Christian conversion. It was at this time that the custom of putting up a Christmas tree was widespread: evergreens, alive in winter, reminded people of the hope that abundance and happiness would once again await them after the winter. According to Germanic tradition, Odin visited the settlements of mortals during the great hunt and brought them gifts. He is also the origin of Santa Claus’ big grey beard, some of the eight reindeer – Odin rode an eight-legged horse, Sleipnir – and the hood that appears on certain depictions.

The image is, therefore, a little more nuanced than the widespread urban legend that the modern Santa Claus look – a portly old man in a red suit, white beard, and smile) was invented by Coca-Cola in 1931. Although the company’s advertising campaigns, timed to the festive season, contributed greatly to the character’s worldwide popularity, many similar illustrations can be found on the pages of newspapers and children’s books from the first half of the 19th century onwards.

An important motif in the origin story is that the former, distinctly traditional, later religious holiday in its present form originated specifically in the United States. The Dutch settlers who founded the colonies figuratively carried Sinterklaas – or Sint-Nicolaas – in their bags, so it is not difficult to reconstruct how the figure was inspired by both the Christian bishop and the Germanic deity made his way to the New World. However, it was understood only much later, after the Civil War, that local merchants began to advertise their wares in this period, with the first advertisements in American newspapers specifically timed to the Christmas season. In the meantime, the Protestant majority slowly came to accept the holiday, having for centuries resented the customs adopted from Catholics to the point that the leaders of the Massachusetts Bay Colony outright banned the public celebration of Christmas in 1659.

Surprisingly enough, the main visual elements of the figure we know today were also developed during the American Civil War. One direct antecedent is Clement Clarke Moore’s poem Christmas Eve, or Santa Claus’s Visit, published in 1823 – which some say he didn’t actually write, but we’ll generously set that storyline aside for now – in which he described Saint Nicholas as an old man riding a sleigh pulled by reindeer. The depiction was not uniform for a long time, however, and there were illustrations that depicted Santa Claus as an older but lean man smoking a pipe and wearing a typical Dutch hat. 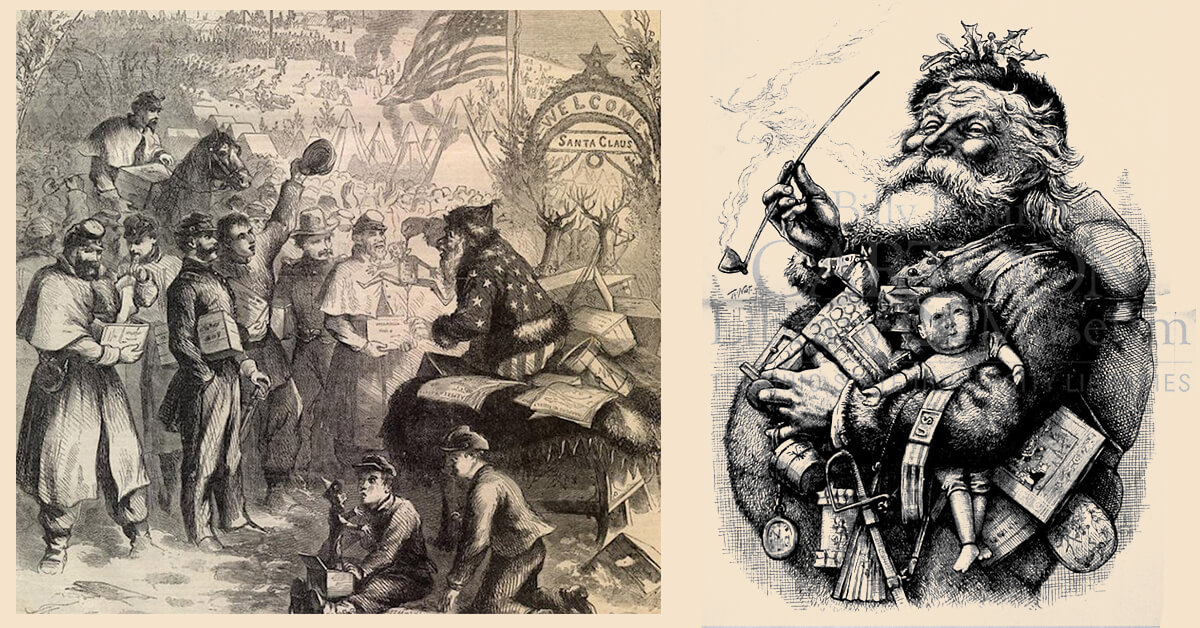 The present-day figure appeared in the drawings of Thomas Nast, a German-born American graphic artist who first produced two illustrations on this theme for the January 3, 1863 issue of Harper’s Weekly magazine, and did so several times later. In the first of the two images, Santa Claus, wearing striped trousers with stars, distributes presents in a Unionist military camp, while a doll resembling Confederate President Jefferson Davis hangs from a rope in his right hand, and in the second, with a praying woman and a soldier leaning against a tree as the two central figures, he is throwing presents down a chimney in the upper left-hand corner.

The figure’s appearance, and the reference to it as a propaganda message, is no coincidence: when Nast was not drawing Santa Claus, he was working as a cartoonist, often illustrating political articles, and was explicitly committed to the abolition of slavery, civil rights, and Republicanism. By 1886, he had produced 33 such illustrations, and in his later drawings, he recycled the imagery of Moore’s poem, including reindeer and a sack full of presents. And this is how the figure we know today, Santa Claus, Santa Claus, Sinterklaas, appeared for the first time. 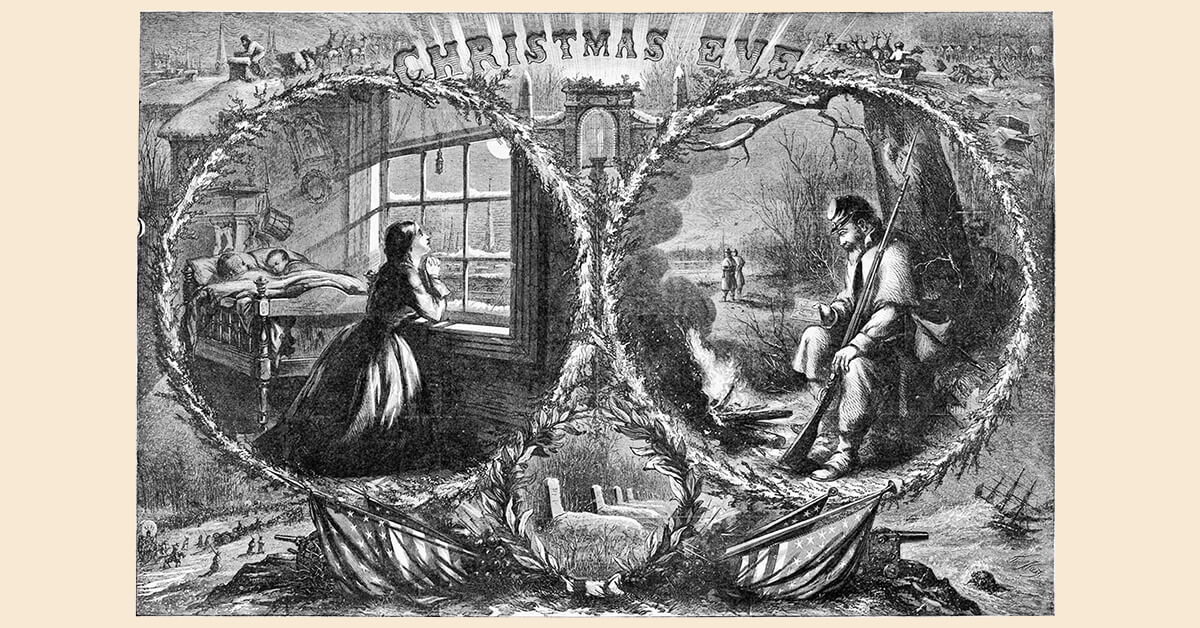 We don’t want to conclude with a lesson, but it is perhaps worth reflecting on how a tradition that has both pagan and Christian origins has traveled across continents, and how the customs of Christmas have influenced the world as we know them today. Could it be that instead of a big bearded uncle in a red suit, our children would be visited by a thin Santa Claus with a pipe and a hat if Thomas Nast had been born in Rotterdam, the Netherlands, instead of Landau, Germany? Anyway, it’s almost time for the festive preparations, and we wish you all good health, patience, and happiness. 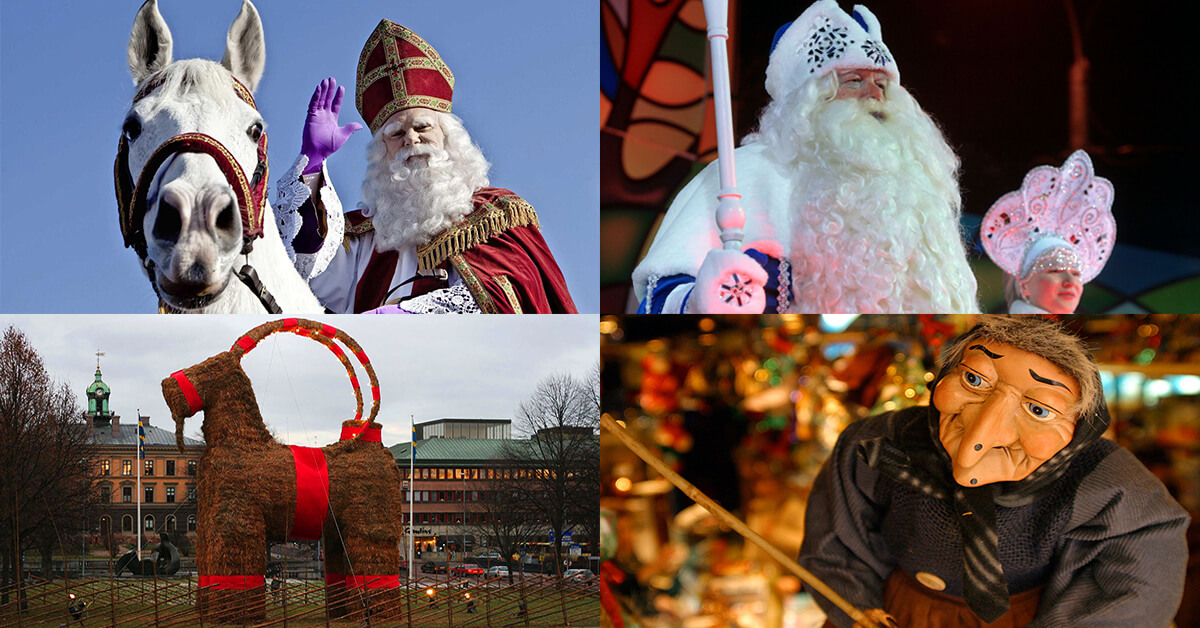 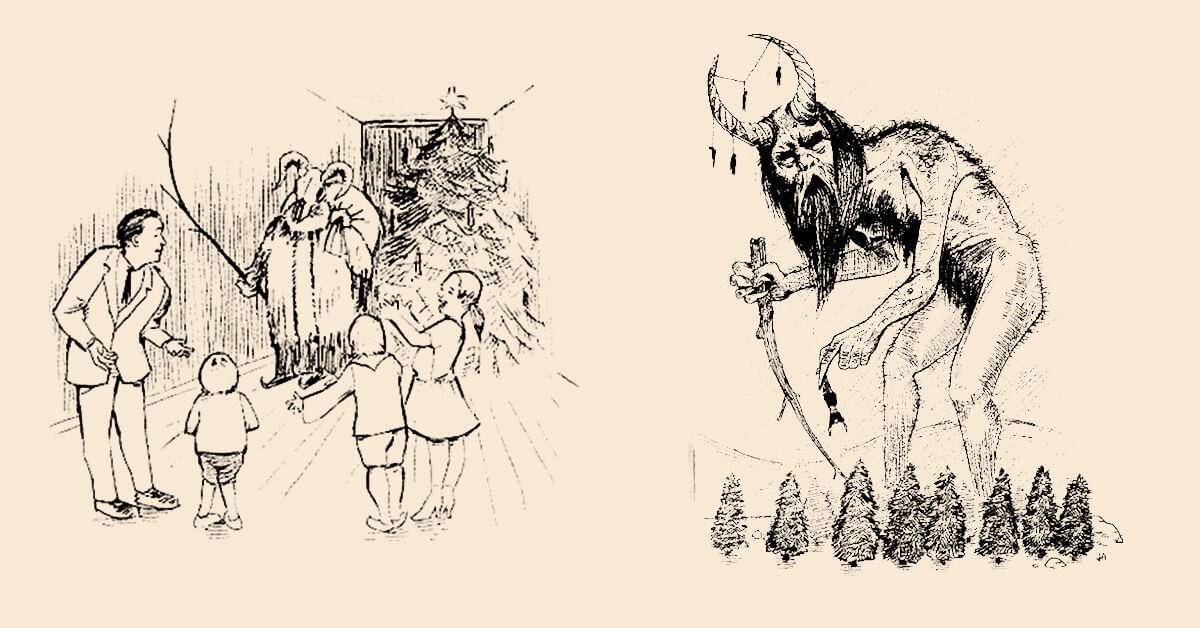